Posted on March 20, 2012 by vegancouchpotato

My victory march began around 6 o’clock in the evening. I stood in front of Chipotle and wondered if I had the internal might to push forward and eat a veggie dinner. During the day I was telling myself that 2 of 3 meatless meals would be an achievement… I could sense myself leaning toward meat for dinner. But alas, I persevered and held my head up high! 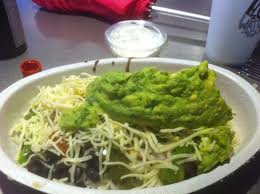 Ahh, the smell of crisp, slightly wet, lettuce; the aroma and warmth of succulent beans; the fiesta of redness, a tomato-ey extravaganza,  that can only be described as “pico”; the yellow glow of corn salsa; the delectable AWESOMENESS that is guacamole; and a small amount of tangy goodness (dressing). You already know where I am going with this- veggie boooooooooooowl 🙂

Till we meet again,

This entry was posted in mexican. Bookmark the permalink.